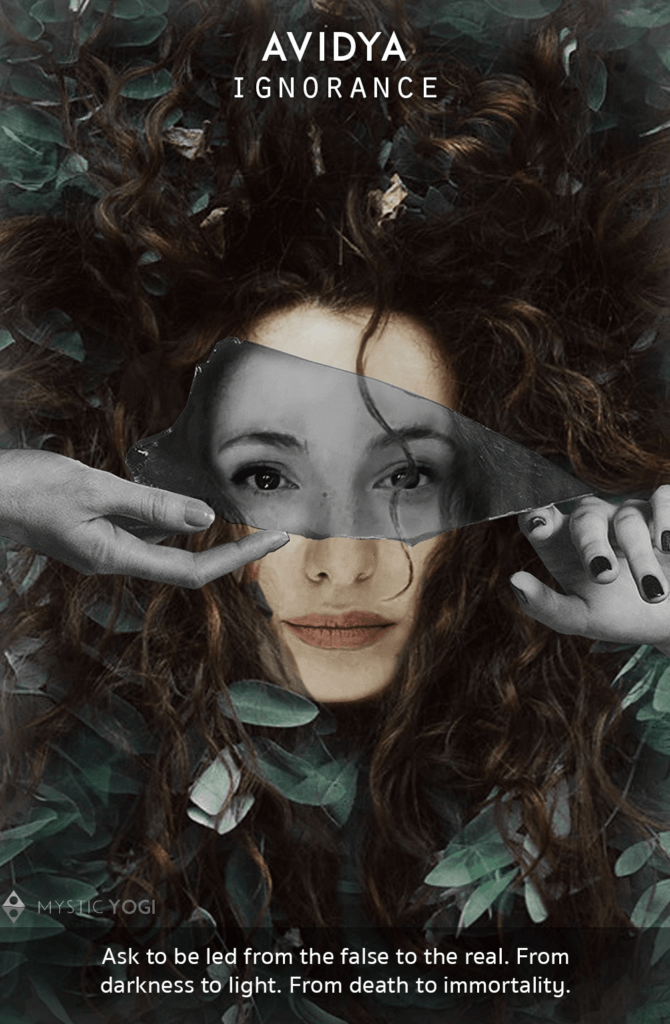 Definition: Avidyā is a compound of ‘a’ and ‘vidya’. The word vidya is derived from the Sanskrit root ‘Vid’, which means “to know, to perceive, to see, to understand”. Therefore, avidya means to “not know, not perceive, not understand”.

Card Symbology:
Ignorance is like looking at the world through shaded lenses – it colours everything we see yet we forget it is there. The two hands of attraction and aversion keep her trapped in an illusion of separation. Her beauty is immense, but she doesn’t know who she is.

“The seeker of God is the real lover of vidya, unchangeable truth; all else is avidya, relative knowledge.”

Avidya is the darkness in the room that leads you to perceiving things incorrectly, or making up things that aren’t even there. According to the yoga sutras, avidya expresses in four different ways: regarding that which is transient to be eternal – mistaking the impure for pure – believing that which brings misery to bring happiness, and taking that which is not-self to be self.

Avidya maintains the illusion that the world is separate from us, which causes us to forget that we are creators of our lives and that all life is interdependent. Separateness arises when the wave mistakes itself as separate from the ocean, which produces the ego that becomes trapped in the duality of attraction and aversion, I and Mine.

Ultimately we all die and the veil is lifted for a moment; this is what Guru Nanak meant when he said “life is false and death is true.” To ‘die before you die’ is to experience the oceanic while still a wave; to be lifted beyond the veil of ignorance and remember ‘that which never dies’.

If you receive this card, learn to pause and ask yourself, “Is this really true, or is my perception conditioned by my beliefs?” Self-knowledge ironically begins with the sense of “I do not  know”, so be curious towards your experience and you will see things as they really are. According to yoga, only the light of Self-knowledge breaks the spell of ignorance. A single candle can dispel an entire room of darkness, while no amount of darkness can extinguish a candle. This is why enlightenment is the pinnacle of the East – it’s the candle that illuminates everything. 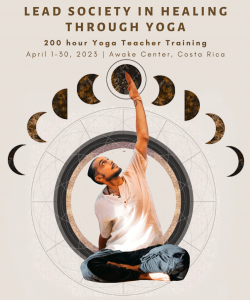 Just poses are not enough, discover a yoga approach that transforms yourself and your students. Integrate body, mind and spirit through mantra, asana, philosophy, meditation, raga music and breath. 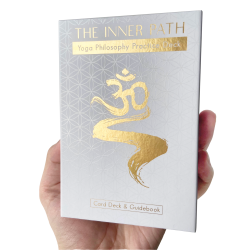 Carry the wisdom of yogic science wherever you go with this yoga oracle and practice deck : featuring 26 art cards and wisdom guidebook. 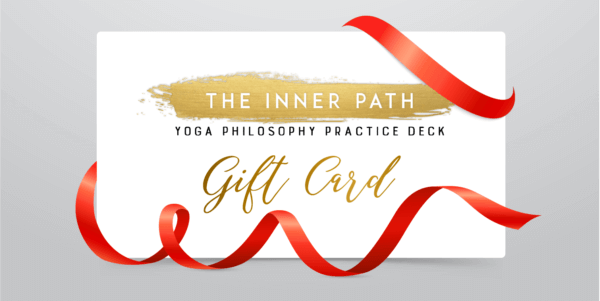